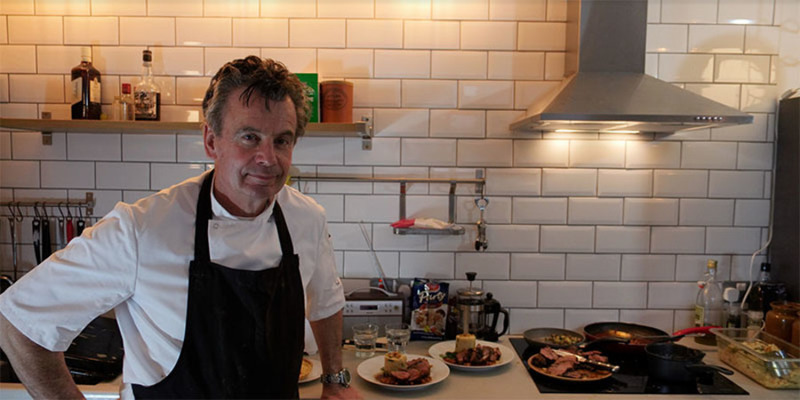 It's all about simplicity for chef Richard...

Richard Gibbs joined eho chef as an established and experienced chef so has an interesting story to tell!  When he first signed up, we immediately picked up that he’s based in Watford in Hertfordshire so is ideal for both London bookings as well as our ‘out of town’ requests.  As Linda from the eho admin team lives in Watford, rather than chat over the phone, she invited Richard for coffee at a rather funky cafe in the town centre called LP Cafe (where you sit amongst hundreds of vinyls waiting to be purchased by music enthusiasts).

During his career, Richard has worked in France, cooked for A-list celebrities including those starring in a James Bond movie and the cast of not just one, but four of the Harry Potter films, he’s owned his own restaurant and he’s showing no signs of slowing down.  Not only does Richard work via eho chef, but he also has his own catering company, runs a cafe for the local film industry and has a portable coffee trolley!  He therefore has access to many colleagues which means he can truly cater for any number of guests.

We asked Richard to feature in this video to ‘tell his story’ and, to summarise his career journey, he loves the simplicity of food. He finds fast food (think wilting lettuce in sandwiches at service stations) ugly and likes to present his food so it is enticing you to load the next mouthful on to your fork!

If you would like to book Richard please feel free to check out our website ehochef.com or email us on foodies@ehochef.com and, of course, you can always call us on 0207 183 1628.